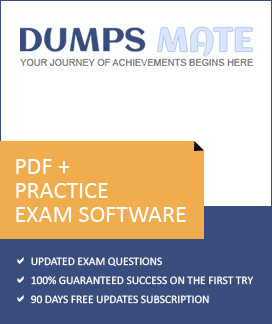 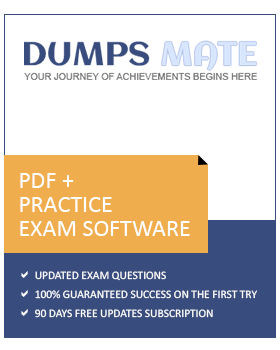 Questions came word by
word from this dump

Vision Media is an international media organization, operating variouslines of business including:

The organization has recently been restructured, and now iscomprised of the following companies and departments:

The organization is also actively pursuing growth in the online market,and is currently holding discussions with the leading online newsprovider about the possible acquisition of their company. This wouldincrease the overall size of Vision Media by around 15%.

The Information Technology department acts as a Shared ServiceUnit, providing IT Services to all of sub-companies and departments,which complement some of the Internal Service Providers that alsoexist. The director of Information Technology has realized the need toimprove the quality of services offered by implementing ITIL, and hasdecided to do so using a phased approach. Some of the ServiceDesign and Service Transition processes have already beenimplemented, and they are now planning the implementation ofService Operation.

While the IT director does have tentative support from the otherdirectors and CEO, budgets for implementing the Service Operationprocesses have not been finalized, and still require a business caseto be formally submitted.

Refer to the exhibit.

The IT director is now considering the implementation of the ServiceOperation functions. However there seems to be overlap between thegoals and objectives for each of the functions, which is causing someconcern among staff involved in the project. 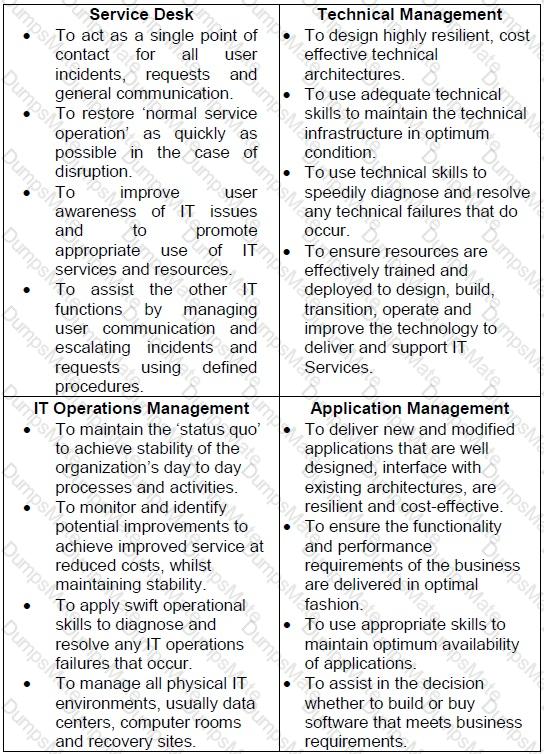 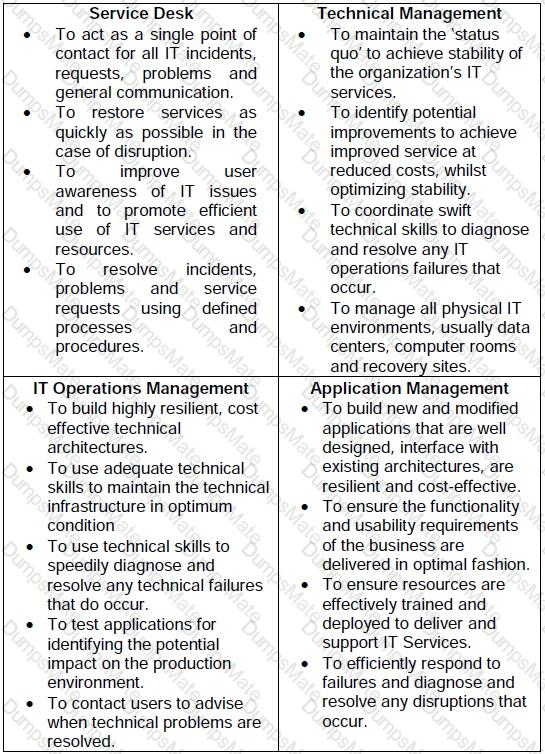 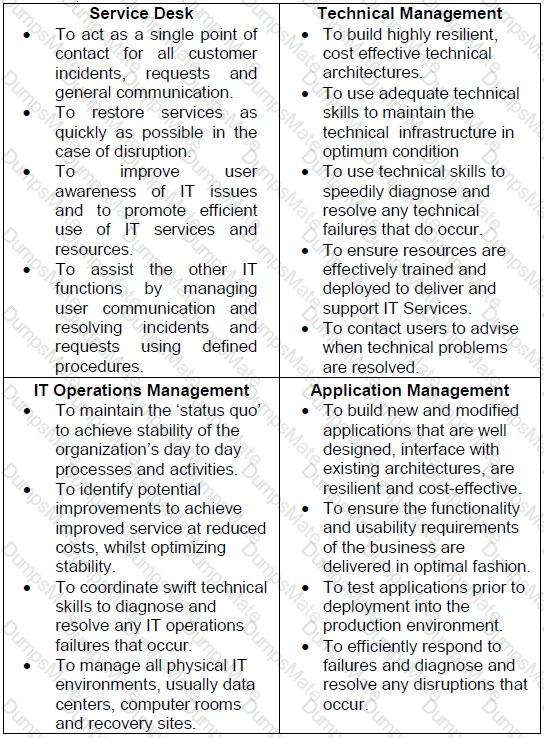 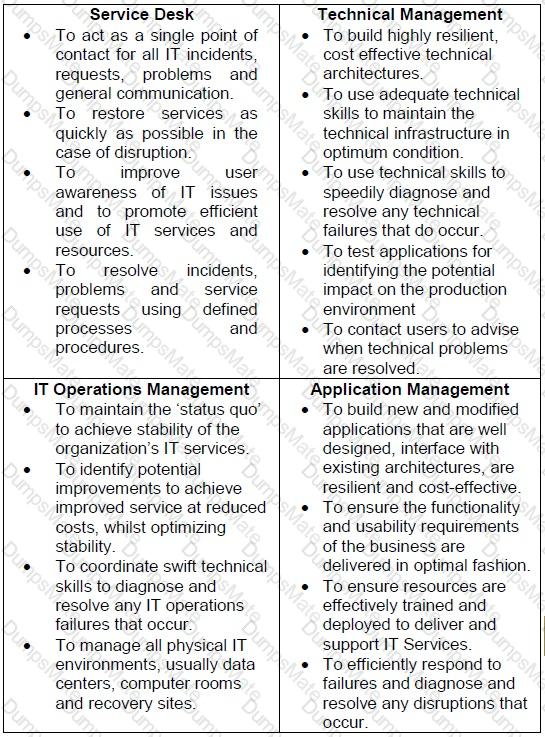 Functions are best described as?

Inter-related activities with a defined goal or output

You are the CIO of a large stockbroking firm, based in Hong Kong.Recently this company has acquired two other major firms in Londonand New York. Total Company staff now exceeds 800 people. EachFirm currently has their own Service Desk.

With this new merger comes new support issues. Complaints arecoming in to say that there si an imbalance with ratio of IT supportstaff to users, Service Desks in London and New York are havingtrouble knowing and supporting new systems which has resulted inusers calling Hong Kong Service Desk. This has resulted in higherresolution times and an inability to get through to the service deskThe Business is not happy with the current situation.

Refer to the scenario. 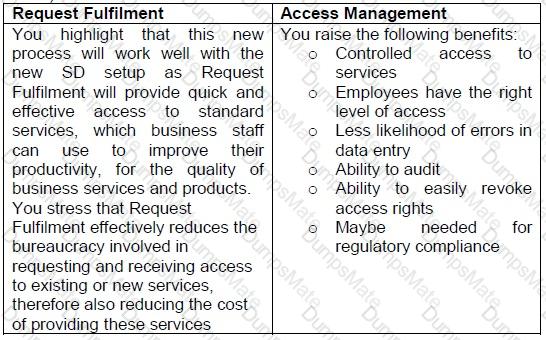 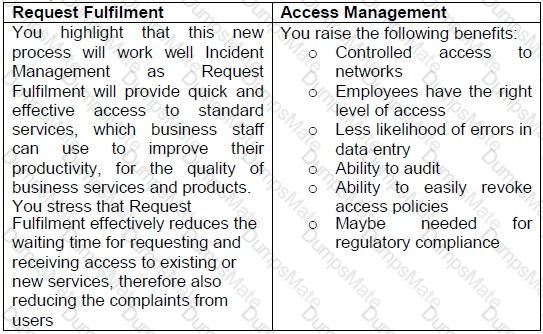 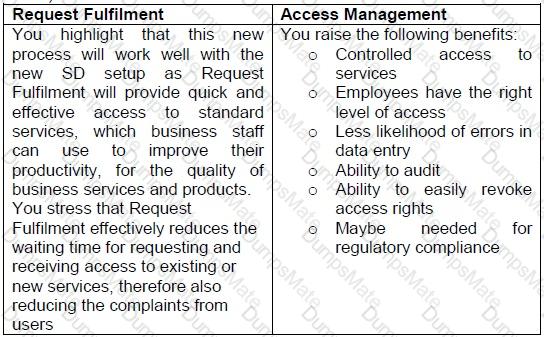 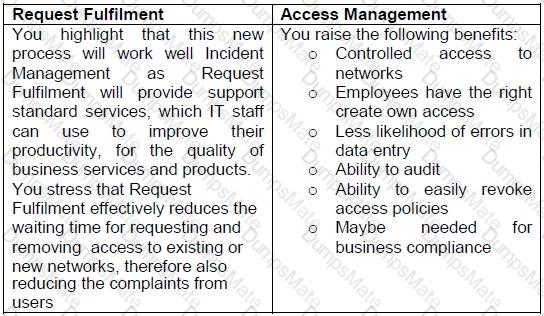 Developed on the format of Exin ITILSC-OSA exam format, DumpsMate Practice Questions help you learn the real exam format and practice it prior to take the exam.

Easy Accessible on All Handy Devices

The practice questions PDF can easily be downloaded on any handy device including your Android phone to continue studies wherever you are.

All in one Solution to get through Exam

The unique practice questions cover the entire certification syllabus, providing you answer keys, packed with verified information. They’re the ultimate option to get through exam.

Success with Money Back Guarantee

Your success is ensured with 100% Money Back Guarantee. If our remarkable Q&As don’t make you pass the exam, get back a complete refund of your money.

1. What are pre-requisites for taking Exin ITILSC-OSA?

There are no particular requisites for taking this exam. Only the exam candidates should have required knowledge on the content of the Exin ITILSC-OSA Exam syllabus. They should also develop their hand-on exposure on the all topics.

2. How can I apply for Exin ITILSC-OSA Certification Exam?

The procedure to apply for this exam is very simple. You have to visit Exin official website to buy this exam. The price is subject to change any time.

3. How will l receive my results, if I get through the exam?

Once you pass the exam, your score card is immediately sent to you.

4. When will I get the product, if I decide to buy it?

The moment you pay the money, you get instant download of our product. There are no delays and excuses at all. You can begin your studies from the very day you purchase our product.

5. What exam preparation material do you offer?

DumpsMate provides Practice Questions, Study Guide and Dumps for the Exam ITILSC-OSA. All these products have been designed by the best industry experts and provide you the most dependable information. Each product has its own specific benefits. They all aim at making your exam preparation easier and fruitful.

6. How does DumpsMate 100% Money Back Guarantee secure me?

DumpsMate money back guarantee secures our clients from loss of money and time. This special offer also testifies the quality and effectiveness of DumpsMate Q&As to award you success in exam. Take back your money in full if our product doesn’t bring success to you.

7. What assistance DumpsMate offers to its clients?

DumpsMate offers the best support to its clients for exam preparation. The clients can contact our Live Chat facility or Customer Support Service to get immediate help on any issue regarding certification syllabus.

8. Is there any special discount available on DumpsMate exam preparation products?

Time and again, DumpsMate launches promotion campaigns to make its products available to its customers. You need to visit our home page occasionally to get information on discount.

DumpsMate's team of experts is always available to respond your queries on exam preparation. Get professional answers on any topic of the certification syllabus. Our experts will thoroughly satisfy you.